Two cyclists at a zebra crossing. It sounds like a joke, but all cyclists know that riding on the sidewalk is much safer than trusting your life to drivers who are always in a hurry and would only risk scratching their cars in case of a collision. So, two wise cyclists meet at a zebra crossing in Singapore. One stumbles to get to the button on the traffic light pole. He seems to be in a hurry, stumbles to get the momentum, as sometimes not pressing the button in time means loosing the chance for a green light, and that results in three frustrating minutes more of waiting time.  Of wasted time.  The other cyclist is a delivery boy, formerly Uber Food, now Grab Food. He looks at the first cyclist, who carries a bag of takeaway food as well: “No rush, my friend, no rush. Take it easy!” The first cyclist, collecting himself, turns around: “You are right. No rush. But I thought you were the one supposed to be more in a hurry than me. “Smiling, the Uber/Grab employee looks at the first cyclist’s bag and says: “You look like you’re in the same line of business.”To which the stumbler replies “At list you get paid for it. No tips for me.” And the final: “See? No need to panic.”

Zebra crossing panic appears in multiple scenarios, most of them involving pedestrians, naturally. The Singaporean system that requires somebody to press a button for the green to light up is not that wide-spread internationally. But a few months ago an experiment was conducted on a street in Bucharest, and such a device was installed. The reason was that the flow of traffic on the road should not be choked when no pedestrian is anywhere near the zebra crossing. Given the usual system of traffic lights in Bucharest is the usual timed one, which required zero interaction from the public, this experiment was a unique chance to find out what kind of signals are pedestrians paying attention to. A list of secondary questions regarding their behavior followed immediately: aspects related to the identification of signs of emotional reactions, acceptance of change, the speed of embracing new habits. My zebra crossing study was part of a larger independent study I was conducting at the time. It focused on negative emotions in the real world and it was a follow-up of another study on representations of the negative emotions in the fictional world, a paper I had written more than a decade ago, which looked into descriptions of fear in realist novels. The problem with the visible signs of fear in the real world is that they are almost unnoticeable. Fear is a state emotion, and it resides so deep within our cerebral system that the reaction it triggers on the outside can hardly be detected, much the less measured in any way. Fiction gives the advantage of a writer’s insight into a character’s brain, but there is no such omniscient voice in the normal, physical world. When it comes to panic, things change, as panic is a response to an imminent danger that requires urgent measures to be taken. The range of signs shown in case of panic are numerous, from frozen disbelief to violence. And the new traffic light on a street in Bucharest was the perfect site to witness most of them. Without going into details, the pedestrians illustrated numerous types of behavior while waiting patiently for a traffic light to turn green, which it never did by itself. Once the patience resources for each individual were depleted, I witnessed and categorized some, with a high incidence of suicidal behavior, which was represented by the attempt to cross regardless of the danger of being run over, or by rage outbursts directed to the traffic light technicians who were, in the opinion of the angry pedestrians, not doing their job properly. This was happening regardless of the fact that no traffic light technician was anywhere near.

Panic buying is an expression that has appeared lately in the news, and it is accurate. Hoarding food is a response to new circumstances that are changing our daily life patterns, and the danger of starvation is much more serious than missing an appointment because of a traffic light which refuses to turn green by itself, as it used to. The list for panic buying encapsulates what is more likely to disappear from the shelves in the near future according to what other people think will happen. It is not a personal decision, but a group behavior triggered by the simple fact that we are all following the same news. And the same news lead to the same conclusions.  For all people. In early February, when surgical masks were still available in every pharmacy in Singapore, the news of a deadly flu virus cleared the stocks in a matter of hours. Hand sanitizers with alcohol went with them. But the surprising item on the list was toilet paper, which had no logical connection to either flu or the attempt to clean the house. As far as the latter is concerned, chlorine and even vinegar expectedly disappeared from the shelves, although only for a short while. What could be more nonsensical than that? Well, for instance the fact that panic is strongly related to sex, tragedy, music and travel.

Greek mythology has provided the representation of the angel as the messenger of God in Christianity: the winged and always busy Hermes. When it came to origin of evil, it was another Greek god who instated the image of a horned, furry, hoofed monster as the devil. But Pan was the son of Hermes, who seduced a nymph called Driops by taking the appearance of a relaxed and handsome young shepherd. As a child, Pan was ugly, too ugly to live among the all-beautiful gods living in the clouds around Mt. Olympus. They quickly sent him down to Arcadia, to live among commoners. Following in the steps of his father, Pan attempted to seduce beautiful nymphs, not always successful, and sometimes with tragic consequences: Pan’s greatest love, Syrinx, chose to metamorphose into reed rather than accept a casual rape. Panic was, in the Greek mythology, the reaction to the opposite of what is expected. Nymphs were willing to befriend handsome shepherds, but frightened when a Pan-devil showed up.  When a second attempt of Pan to find love failed again and nymph Pitys changed shape and became a pine tree once a jealous god, the wind, pushed her off a cliff, Pan became a musician and went on wondering the world while sadly playing his reed-made pipes.  The choice of reed for his instrument was clearly not an accident. Sometimes Pan’s attempts to find love were successful, albeit for a short while. Another nymph, Echo, who was to become a sound after Narcissus refused her love, had given birth two children of Pan’s, Iambe and Iynx, both musical and tragic characters. Tragic circumstances are strangely related to music, as well as with wondering, with true wondering, which is purposeless. The Greek suffix “pan-“ in πάνδημος, which means “all”, also originates, etymologically, from the name of the Greek god turned devil by Middle Age Christian traditions. And pandemic is something that happens to all people. 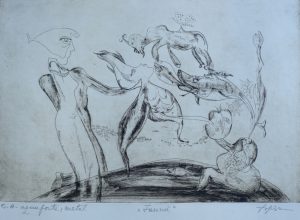 When I was a teenager, a family friend gave me a precious gift. It was an aquaforte, actually an etching that required exceptional amounts of hard work and plenty of intricate operations that only a restrictive brotherhood of old masters like Albrecht Durer, Rembrandt or William Blake were able to use. The artist, Tudor Popescu, who passed on recently, was a major visual artist in Râmnicu Vâlcea, Romania, where he was experimenting with many techniques, from monumental church paintings to canvas oil painting, always with amazing results. All his works had a hidden message, and like the old masters, each work of his was brought to perfection regardless of how much time the process would have taken. The aquaforte was titled Faun, which is the Latin name for the Greek god Pan. It can be best described as a visual “Afternoon of a Faun” by Debussy, sensual yet calm. As most of Pan’s adventures happen in quiet pastures, Pan/Faun is associated with otherwordly quiet gardens. And there is no other garden more likely to recall such atmosphere than the one surrounding the house where Tudor Popescu’s father resided. From the street, the garden seemed a wild-Romantic watercolor, and the scent of the forest was overwhelming once the visitor passed through a large wooden gate that was carved with traditional motifs that only Picasso or Constantin Brancusi were able to duplicate. But there was a different and much more spectacular site beyond that wall of seemingly uncontrolled vegetation. A meandering path was leading through a dark jungle-like canopy and further on towards a Japanese sand garden which would abruptly open the perspective, as if to a different world. And finally a wave of multicolored roses that Tudor Popescu’s father, a pediatrician who traveled frequently to Switzerland, had planted in a well-chosen sequence would hit all your senses simultaneously. The entire space, the garden surrounding Doctor Romulus Popescu’s villa on the Capella hill in Râmnicu Vâlcea, including the books, ceramics, furniture and old carpets collection inside, have changed hands and are now a thing of memory. But only there was I able to understand how Debussy was painting in sounds, and why an etching of Pan sounds like Debussy. And when I panic, I think of that quiet garden on a hill. 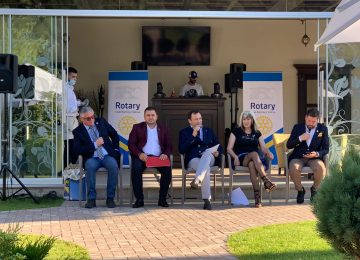 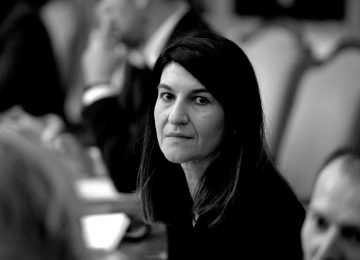 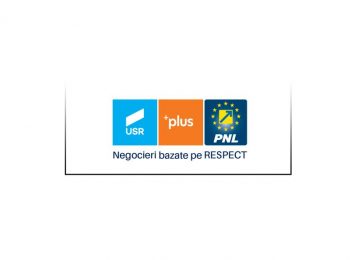 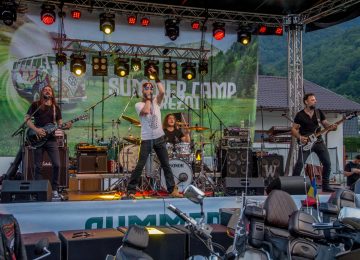 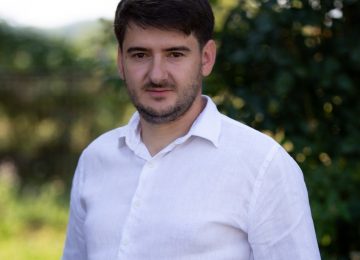